Well, we’ve almost made it through 2022. I’m writing this article the last week of the year and while we don’t have final numbers yet, I don’t foresee these numbers changing dramatically in the final 4 days of the year.

Our market made a dramatic shift late spring this year. Up until that time, multiple offers, bids well over asking and cash deals were the norm. Then mortgage rates rose more quickly than practically anyone can remember, 3.5% to over 7% during the course of the summer for a 30 year fixed loan. The market power quickly shifted from sellers to buyers, but buyers weren’t sure they were interested in transacting at these high rates. Thankfully, rates have come down a touch through the end of the year, but as you can see below, our Under Contract and Sales numbers are down about 28% compared to the same time in 2021. While Available homes are up 174%, that is off such a historic low point, that we still have generally constrained inventory 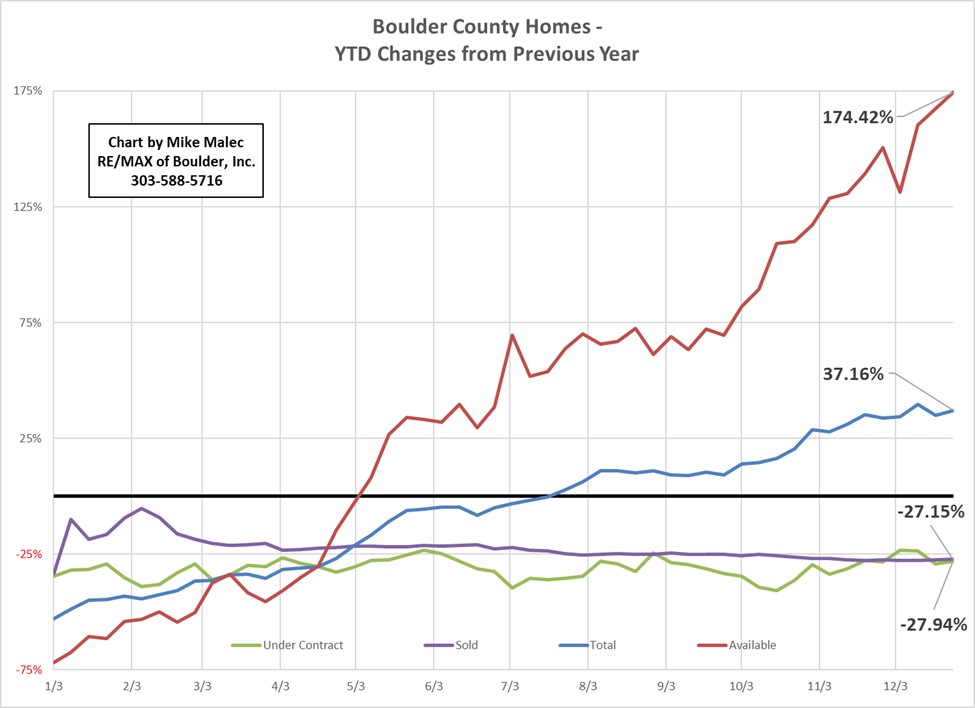 My forecast for next year isn’t clear yet. The dilemma, this strange market we’re in today has very low numbers of sellers and buyers. I don’t foresee a huge increase in the numbers of sellers due to their generally strong equity positions after years of high appreciation, locked in low mortgage rates and fear of the future locking them in place. Buyers have been chased off by high rates, but if rates continue to trickle down, we could see a relatively strong spring. Next year will likely be another year of low transaction numbers as we’ll mostly be helping people who have to transact due to combining households, death, divorce, job change, etc. I don’t foresee large numbers of people moving by choice, upsizing, downsizing, moving to better neighborhood, etc. Of course at the beginning of 2022, we weren’t expecting an almost 4% point jump in rates either, so always hard to forecast a market which can be as variable as ours!

Hope everyone has a happy, healthy and prosperous 2023!

Related Articles
Uncategorized Q3 2022 FHFA HPI Updates FHFA released their numbers for their House Price Index for the Third Quarter of 2022 and there were many interesting nuggets. U.S. house prices rose 12.4 percent from the third quarter of 2021 to the third quarter of 2022 according to the Federal Housing Finance Agency House Price Index (FHFA HPI®). House prices were up […]
Uncategorized Marshall Fire Lot update and dramatic drop in Percent Under Contract As we get closer to the one-year anniversary of the Marshall Fire, I wanted to give everyone a look at the progress of the sales of lots where homes were lost. These figures were pulled on Oct. 27th. Anecdotally, it seems like closed prices for lots are dropping. I don’t have hard numbers on that, […]
Uncategorized Interesting changes in the Percent of Single Family Homes I’m seeing an interesting pattern develop in the Percent of Single Family Homes Under Contract across all of Boulder County. In a typical year, we hit the low point in the seasonal cycle sometime in late summer or early fall and then start moving upwards towards the high point of our seasonal cycle which usually […]