Interesting changes in the Percent of Single Family Homes

I’m seeing an interesting pattern develop in the Percent of Single Family Homes Under Contract across all of Boulder County. In a typical year, we hit the low point in the seasonal cycle sometime in late summer or early fall and then start moving upwards towards the high point of our seasonal cycle which usually occurs late spring or early summer. Also, in a typical year, we have a small dip in this number right at the first of the year when many listings expire or get re-listed.

This year has been different. We started with the typical rise from last year’s bottom and had our typical New Year’s dip. What’s been unusual is that now, since mid-March, we’ve been wobbling around 65% under contract at a time when we should be going straight up.

Couple of possible explanations for this atypical pattern. Since mid-March, mortgage rates have risen dramatically. Another possibility is that we’re at the very upper end of where this metric has ever been. When you’re flying in thin, rarefied air, stalls are more likely. This is one metric I’ll be keeping a sharp eye on. If it starts dropping instead of wobbling, that would be a signal of a change. 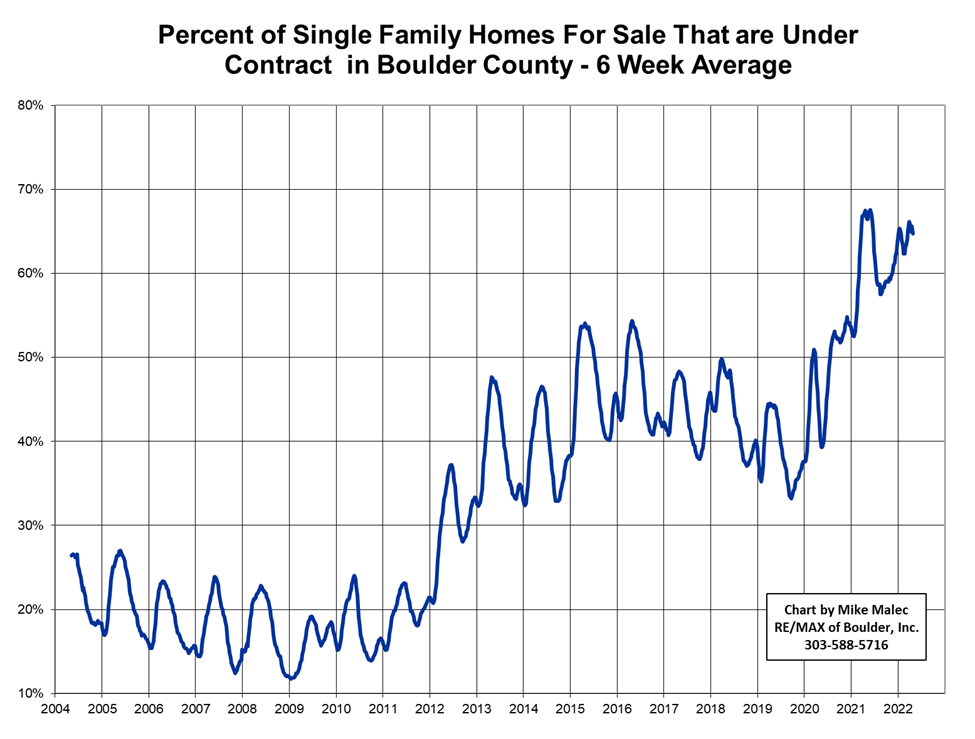 What makes this changing pattern harder to decipher, there are so very few homes for sale right now. As you can see in the chart below, we have never seen such low numbers of homes for sale in the last 17 years I’ve been tracking these numbers. In our most recent “new normal”, 2013-2020, we were seeing around 1,000 single family homes for sale at the end of April. During our last poorer market period, 2005-2011, we were seeing maybe 2,400 homes on the market towards the end of April.  At the end of this April, we had 402 homes for sale in Boulder County. Always disconcerting when you run a search and don’t receive any results. Do you have a criterion wrong or is there really nothing for sale? 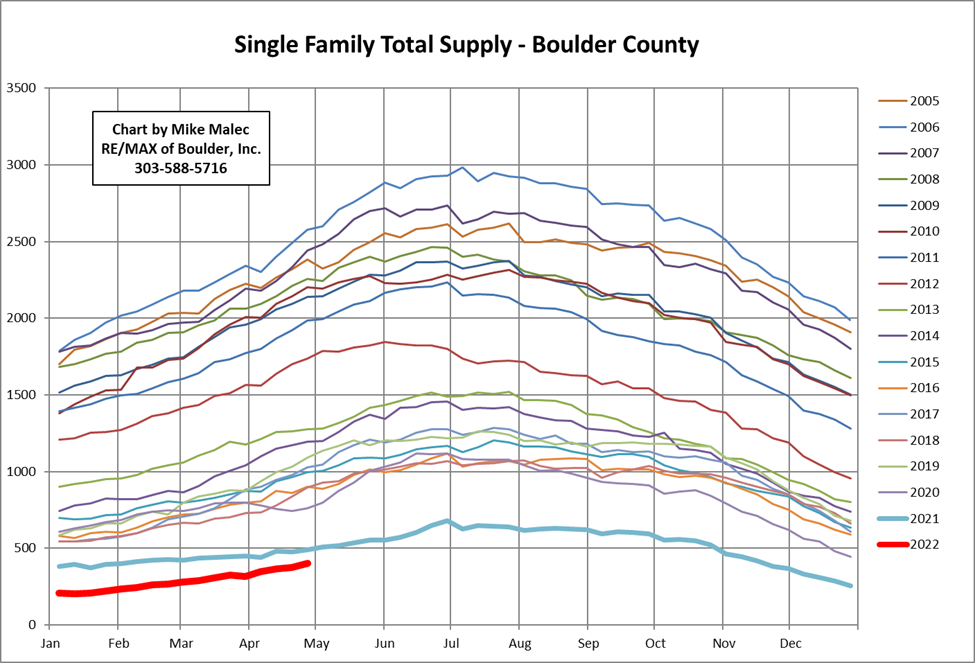 Anecdotally, I’m hearing the market has decelerated since mid-April, but so far not seeing much confirmation of that in the stats. As always, I’ll keep watching the ebbs and flows in the numbers and the metrics.

Hoping for a wetter May!

Related Articles
Uncategorized Marshall Fire Lot update and dramatic drop in Percent Under Contract As we get closer to the one-year anniversary of the Marshall Fire, I wanted to give everyone a look at the progress of the sales of lots where homes were lost. These figures were pulled on Oct. 27th. Anecdotally, it seems like closed prices for lots are dropping. I don’t have hard numbers on that, […]
Uncategorized 2021 Sales Price to List Price Ratios for Boulder County This should be the last of my slightly delayed looks at the 2021 market numbers. Here I’ll be looking at the percentage of homes selling for asking price or better and how that metric has trended over time. The data I used for this chart has had any sales concessions deducted from the sales price […]
Uncategorized 2021 Boulder County Real Estate Market Review Time to take a look back at the 2021 sales numbers for the Boulder County real estate market. As is usual, these stats are IRES data only and may miss sales only attributed in REColorado and any sales not reported to the MLS system such as some new home construction sales, for sale by owner, […]