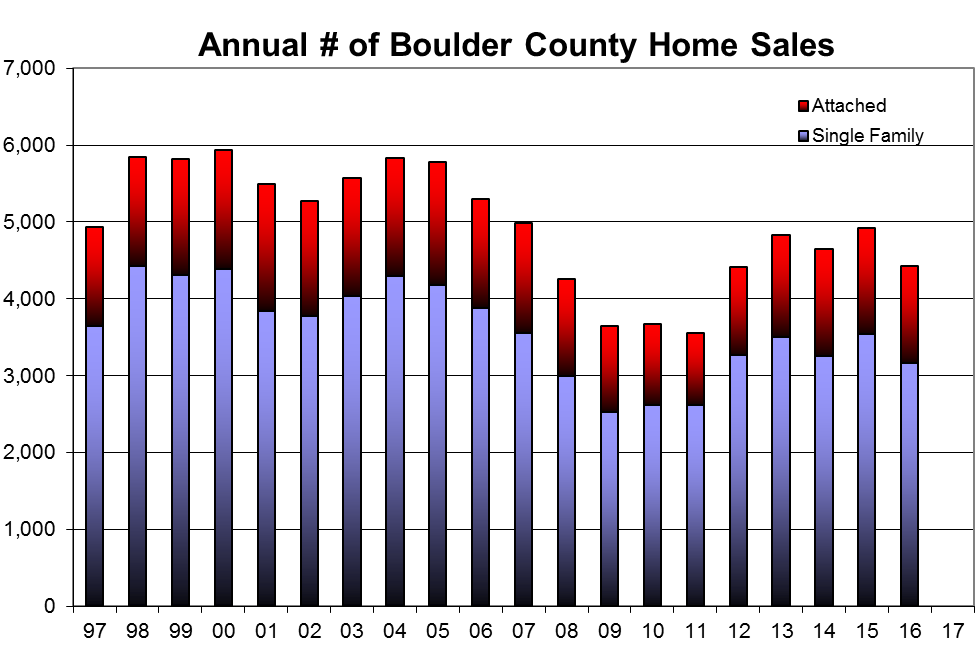 As is typical at the start of every year, we look back at what happened in the previous year and attempt to sift the tea leaves into some meaningful patterns to help determine where we’re headed. As with any time you’re trying to interpret data sets, different people can see different patterns, but this is my take based on IRES only data.

2016 remained a great time to be a seller and a frustrating time to be a buyer. While many sellers still enjoyed multiple offers, it felt as if there were fewer numbers of offers in our multiple offer situations.  In 2015 you might have seen 8 offers for a new listing where in 2016, maybe you only saw 3 offers.  Hard to complain about as there were still multiple offers, but a change from 2015. It also felt like buyers who waited until mid-summer to start making offers had a little bit more leverage than they did in 2015. One thing that is apparent to me as I go through the 2016 stats is that we are starting to see some wobbles, different metrics telling opposing stories about where the market is heading, typically a sign that change is coming.

Sales in 2016 did drop compared to 2015 with 374 fewer Single Family home sales for a total of 3,176 sales and 126 fewer Attached Dwelling home sales for a total of 1,254 sales. The market effect of this drop in home sales is hard to quantify. The number of homes listed for sale also dropped but on a percentage basis, the number of sales dropped more. So if demand and supply are both dropping, but demand is dropping more than supply, what does that mean? Probably a sign that price appreciation is set to slow down. With prices having risen as much as they have, the continued drop in the number of sellers remains perplexing. I think many sellers are sitting on the sidelines due to a combination of a lack of good replacement options, the cost of those replacement options and the rise in interest rates that combined typically make a change to a new home a difficult decision to make. With the loss of these sellers who choose to move, we’re left with the lower number of sellers who have to move due to life changes that necessitate a change, such as death, divorce, job change, etc. 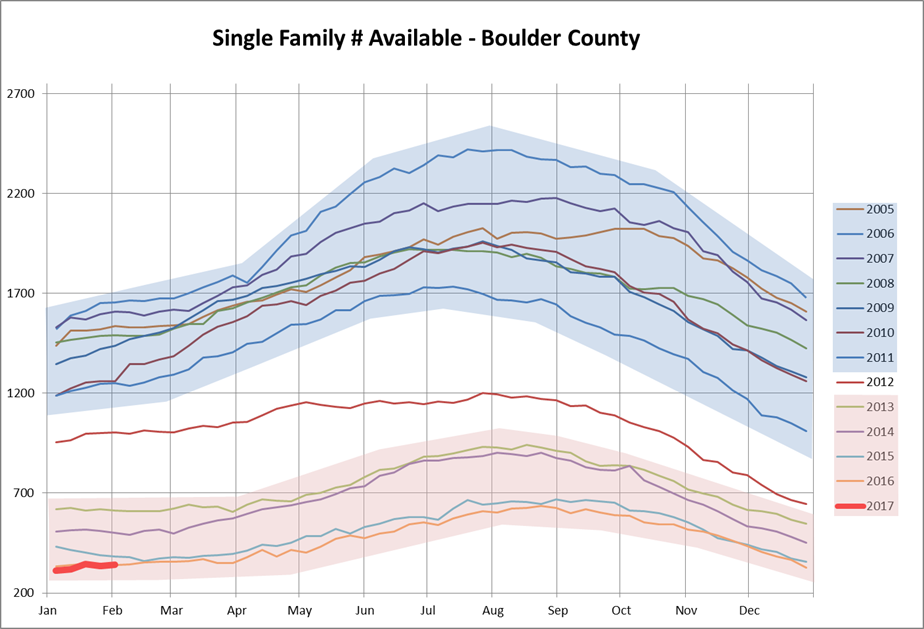 The above chart shows that we continue to see lower levels of homes for sale than we’ve seen at any time in the last 13 years. I also don’t see any sudden moves in this chart that show that supply is set to dramatically increase in 2017. We remain firmly in the bottom of the red area that is our new normal that we’ve seen since 2013. For the people that see a bubble in our rapid price appreciation, I say that it is really hard to have a bubble with the constrained supply shown in this chart. I don’t expect to see major changes in our market strength until we see major changes in this chart and supply that rises up and out of the red area.

While the chart above gives me confidence in the strength of our market moving ahead, the chart below does give me some pause. This chart is one of those wobbles I referenced above, a metric that is trending in a direction that would imply the market is changing, a possible leading indicator. In the chart below, you’ll see a downward red arrow at the top right connecting the % of Homes Under Contract at the start of Jan. 2016 with the same number at the start of 2017. The downward slope of that line tells me our market is slowing even though we’re still seeing multiple offers and buyers fighting over properties in the lower price points. If you look back in this chart to the period from 2005 to 2009, you’ll see a similar downward trending red arrow in the lower left that led us into our last downturn. At a recent economic forecast presentation that I attended, the speaker joked that economists can find trends in any two points and while that joke got a laugh, we’ll want to see some further confirmation of the new trend in the chart below before we start to be too concerned. One other trend I see is that homes that sell the first week are very active with possible multiple offers, but if the property lasts on the market longer than a week, the showing activity slows quickly. We have really trained our buyers to be ready to jump on properties that meet their needs but once a property gets past that initial rush there can be a showing lull. The sales price to list price ratio also quickly drops once a property remains on the market past the initial week. I’ll have those stats in next month’s article. 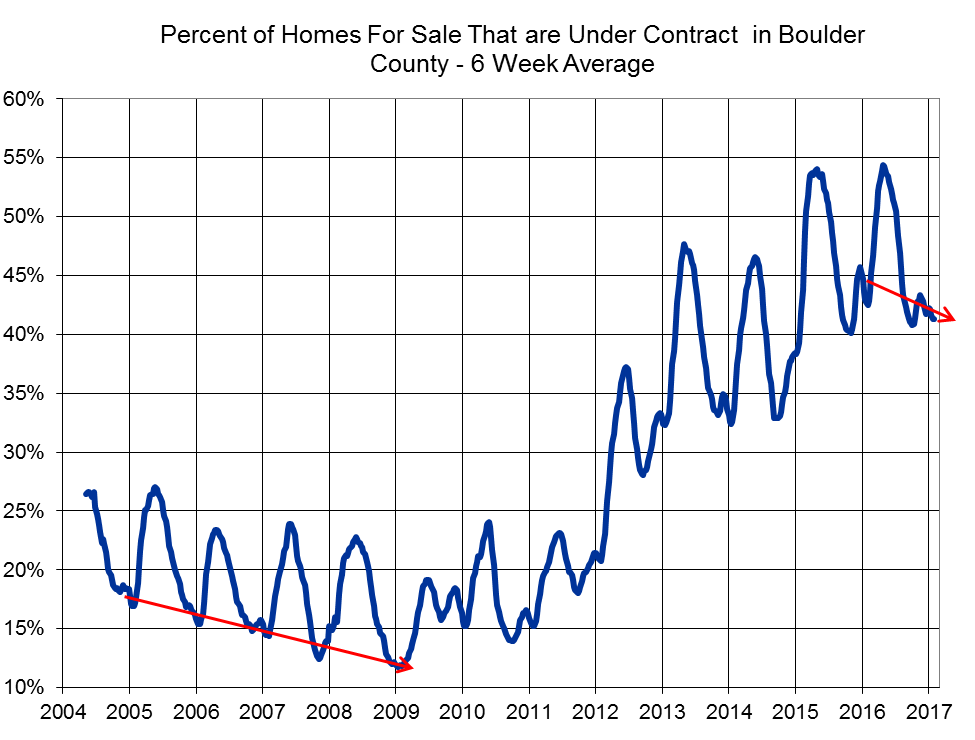 For 2017, I see the beginning of the year looking a lot like 2016. I expect we’ll see a very active market through the spring with bidding wars in the lower price points. As you move up in price, the activity will moderate some, but these properties should also expect to see an active spring. We’ll have to see if we get the mid-summer lull we’ve seen over the last three years. There has been a debate about the higher interest rates we’ve seen so far this year, will they hurt or help the market. In the short term, I think the higher rates are making many buyers jump off the fence and buy something before rates get even higher which is helping the market activity. In the long term though, higher rates will slow the market down. We have been at historic mortgage rates for so long now, we’ve forgotten how good rates are. A chart of interest rates going back to 1974 should add some perspective. While there have been three periods of lower rates than today, they’ve all been since 2011 and we’ve had good strong markets many times since 1974 with much higher rates. When rates do rise, we’ll survive. 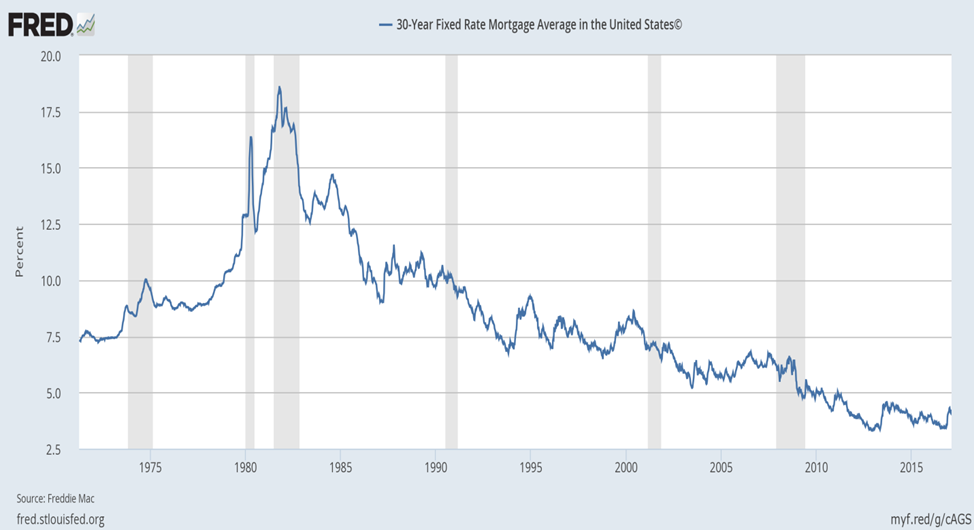