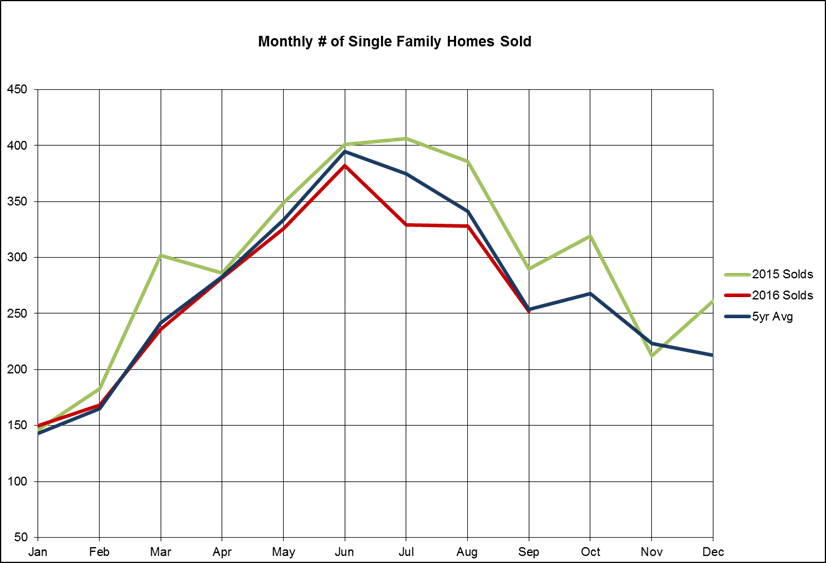 As we get closer to the holidays and the end of the year, it’s safe to start making some assumptions about how the 2016 numbers are going to play out for the Boulder County market. The big story that we’ve seen this year is that we’ve had fewer sales of both single family homes and attached homes in Boulder County when compared to 2015 and to the average of the previous 5 years. 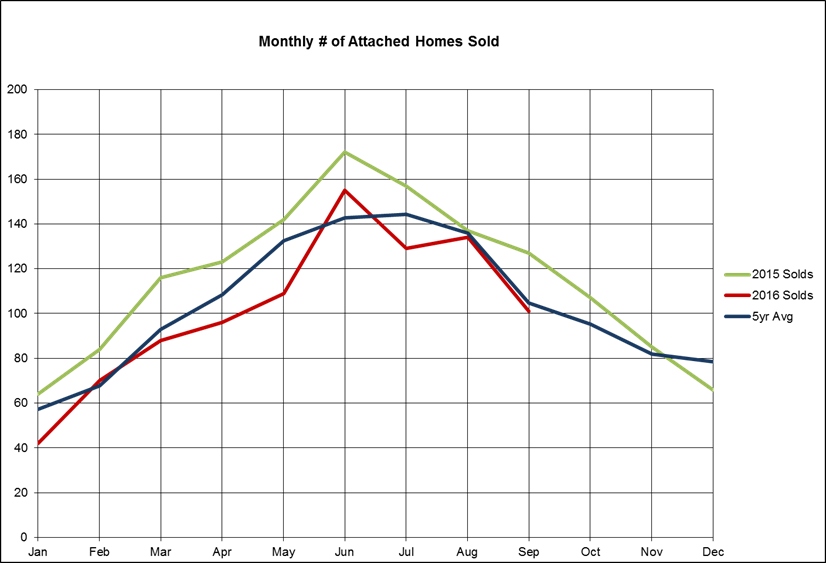 Dropping numbers of sales would typically indicate a slowing market, but our inventory has been dropping even more than our sales preventing the market from slowing. You can also make a strong case that our dropping sales are likely to have been caused by the historically constrained inventory. In the chart below, I’ve drawn a blue shaded area around the inventory that existed in the years of 2005 through 2011. That was the old normal range for inventory in our market. 2012 was the transition year where we went from the old normal levels of inventory to the new levels of very constrained inventory in the red shaded area of 2013 through 2016. As of October 24th, there were 543 single family homes for sale across all of Boulder that were not already under contract. That number is about one-third of the average of the available inventory that existed in the blue shaded area. Hard to have increasing sales when there are so few sellers. Many of the metrics that we watch are starting to display some changes in trend. We’re also starting to see some trend changes in individual markets. I think both of these are signs that we’re nearing the end of the current cycle of rapid appreciation. It will be interesting to watch the inventory build next year. Will it stay in the constrained red zone or will we see a transition back to the blue zone in the chart below? 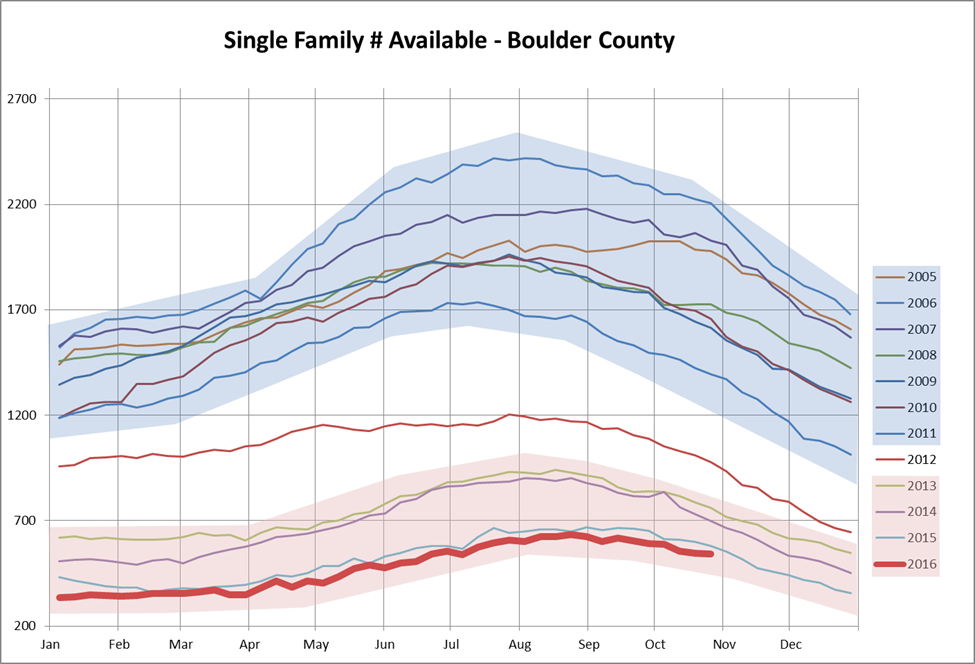 When we analyze the low inventory numbers and the absorption rates derived from the sales numbers, we can create another metric, Months of Supply. This shows how quickly every home on the market would sell based upon the previous month’s sales. In this metric, anything less than 5 months of supply indicates a seller’s market, territory we’ve firmly remained in for the last two years. This is another metric that we’ll be watching in 2017 as it reacts relatively quickly to market changes. 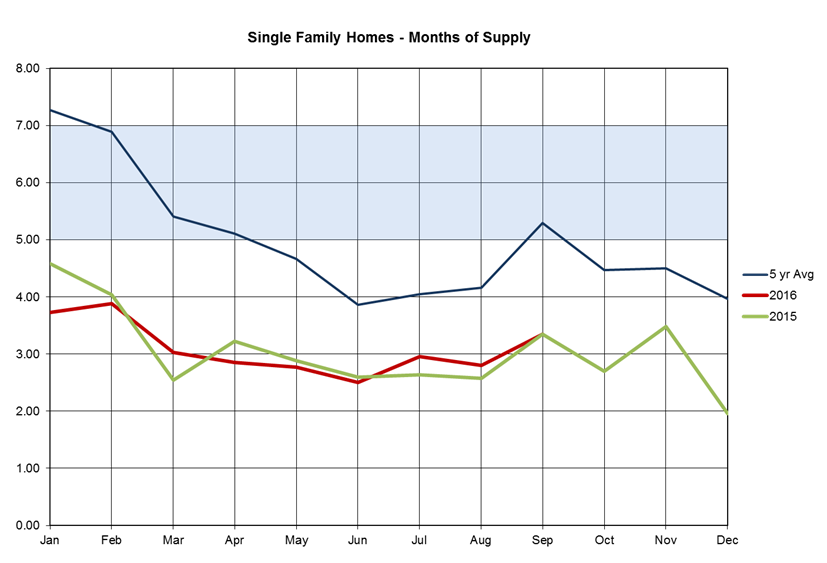 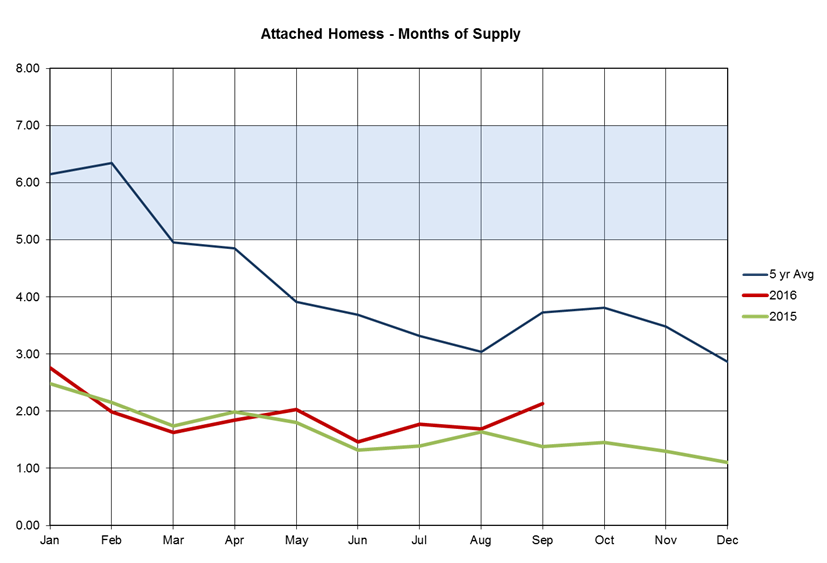 Watching the market through the remainder of this year and into 2017 is going to be interesting and telling.  I hope everyone has a wonderful fall!

Related Articles
Uncategorized Boulder County – Percentage Under Contract Increasing We’re seeing an interesting development in the chart of the Percent of the Single Family Homes that are Under Contract in Boulder County. Every fall, that percentage reaches the bottom of its drop from the summer peak and rebounds, usually climbing through to next summer’s peak. There can be an anomaly each year in January […]
Uncategorized The Return of Seasonality? The question I hear everyone debating right now is when will the “Summer Slump” end or if it already has. Interestingly, I am no longer hearing if the “Summer Slump” will end. Brokers and sellers are debating if the recent upswing in market activity is real or just a couple of atypical data points. So […]
Uncategorized Increasing Price Changes? I frequently will feel something in the market and then look to the stats to see if my feeling is confirmed with hard numbers. Lately, it has felt like I’m seeing a lot more price reductions as sellers try to navigate the “summer slump”. Luckily for a little over two years now, I’ve been tracking […]