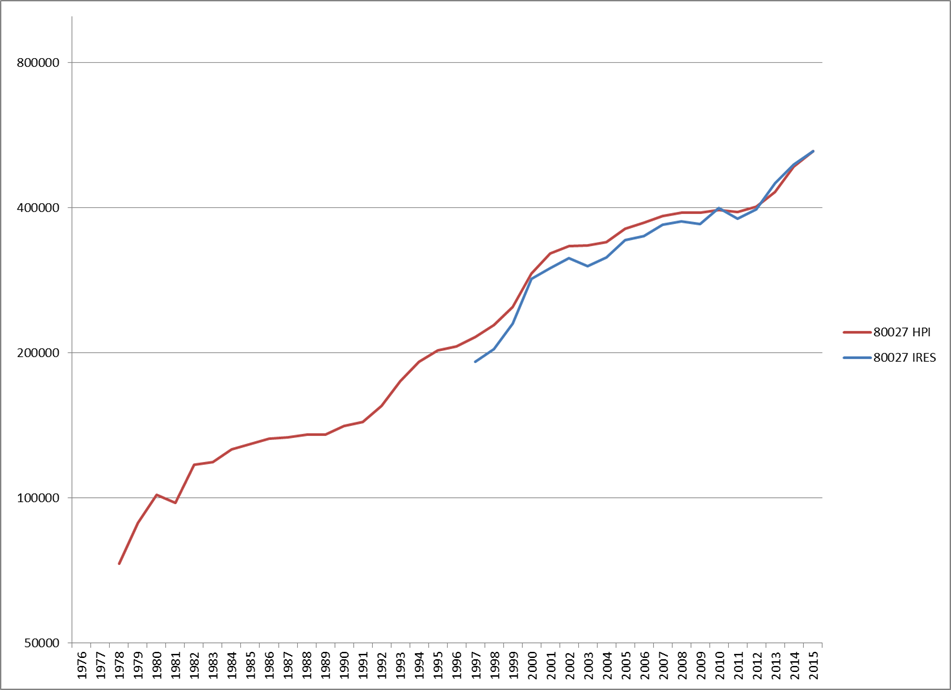 We’ve discussed before the FHFA HPI index that tracks quarterly price changes for homes across the country. This index is available for the entire country, 4 large national regions, individual states and 382 MSA’s on a quarterly basis.  FHFA has just released a new experimental index that uses the same paired home sale methodology as the quarterly index but now breaks the data out for individual zip codes and shows their appreciation rates on an annual basis. This was data I was very excited to get my hands on and play around with.

Many interesting trends and tidbits in the data that I’ll go through below but first some general thoughts. I was surprised at how consistent the data was as I was expecting much greater divergences between the different zip codes than I found. Not all zip codes have had enough sales to include in the analysis, so some comparisons I’d liked to have looked at weren’t possible due to data availability. Zip codes can be quite small and also maddeningly large with some zip codes nicely following city boundaries and some spanning areas larger than you’d want. I don’t put as much faith in the earliest data in this index; the populations in all of these zip codes were much smaller in the 70’s and therefore small changes had larger effects back then. This index only provides appreciation rates, to come up with actual median property values; you have to input a value into the computed appreciation rates.

One of the first things I did when I got this data was to cross check it against the MLS data for 80027. I chose 80027 as I live in Louisville and it’s a zip code where the zip boundary nicely follows a discrete market segment. In the chart below you can see some divergence between the zip code HPI data and the median price data from the IRES MLS system, but not enough divergence to make me doubt the veracity of the zip code HPI data. As I mentioned, the HPI data does not provide home values, just appreciation rates. I used IRES to give me the Median home value for the 80027 zip code for all of 2015.  This value of $502,816 was then used to create the computed home values and take them back in time using the HPI appreciation rates.  For the chart below, you’ll see that the HPI data and the IRES data share the same $502,816 starting point in the upper right corner of the chart.

Once I was fairly confident in the data, I started making comparisons.  The first comparison was the widest and looked at most of the zip code areas in Boulder County. You’ll note that not every zip code has the same starting date of 1976 as some didn’t have the required 100 sales to start the index creation. Some zip codes were not included as they overlap far into other Counties. I was struck in this chart that the different zip areas are all consistent in their general slopes and that on a macro level, the entire county has had consistent appreciation. In the late 70’s you’ll see large changes in home values up and down. I think these gyrations are likely due to small sample sizes in some of these zip codes. You’ll also note that there is a divergence in the zip code lines over time. When the index started, the zip codes were separated by about $25,000 or 60% of value, but by 2015, the zip codes are separated by $650,000 or 241% of value.  The zip codes that appreciated the most appreciated far more than the zip codes that appreciated the least. Not surprisingly, the most expensive zip codes are all in Boulder and the least expensive are in Longmont.  Erie, Lyons and some of the Foothills communities are missing from this graph due to the data constraints mentioned above. 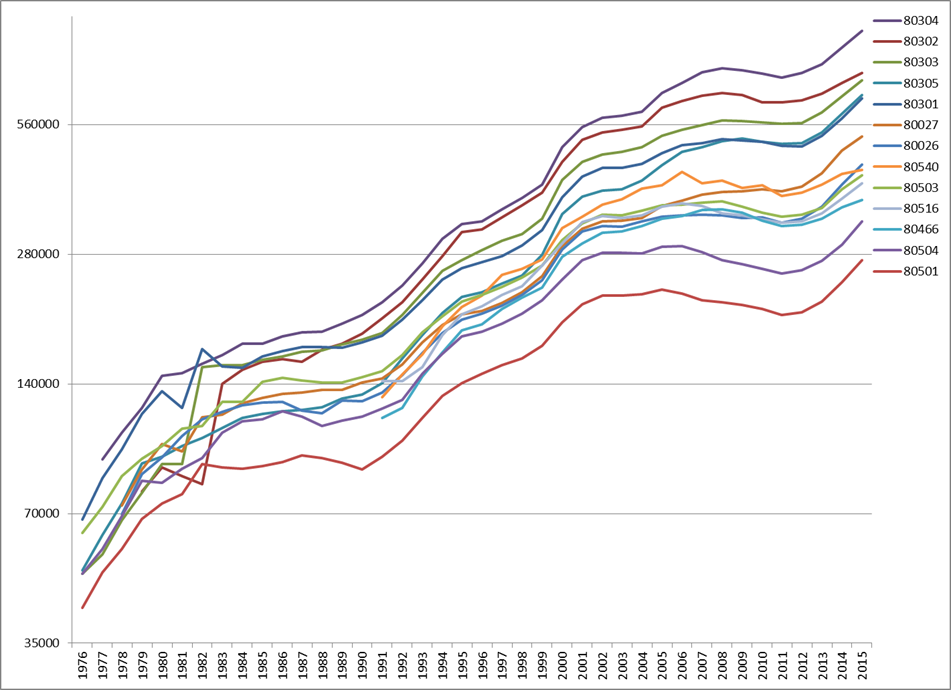 Looking at all the data on a County wide basis made it a bit difficult to tease out some of the interplay between the various areas. One interesting pair to look at was 80027 and 80026.  I’ve frequently told people that Louisville/Superior will surge in home values until it gets to a point where Lafayette looks like a better value and then Lafayette values will snap back towards those in 80027.  It was gratifying to see that confirmed in the data although you could make an argument that Lafayette doesn’t appreciate as strongly in the downturns but then snaps back to the 80027 levels in the upswings. 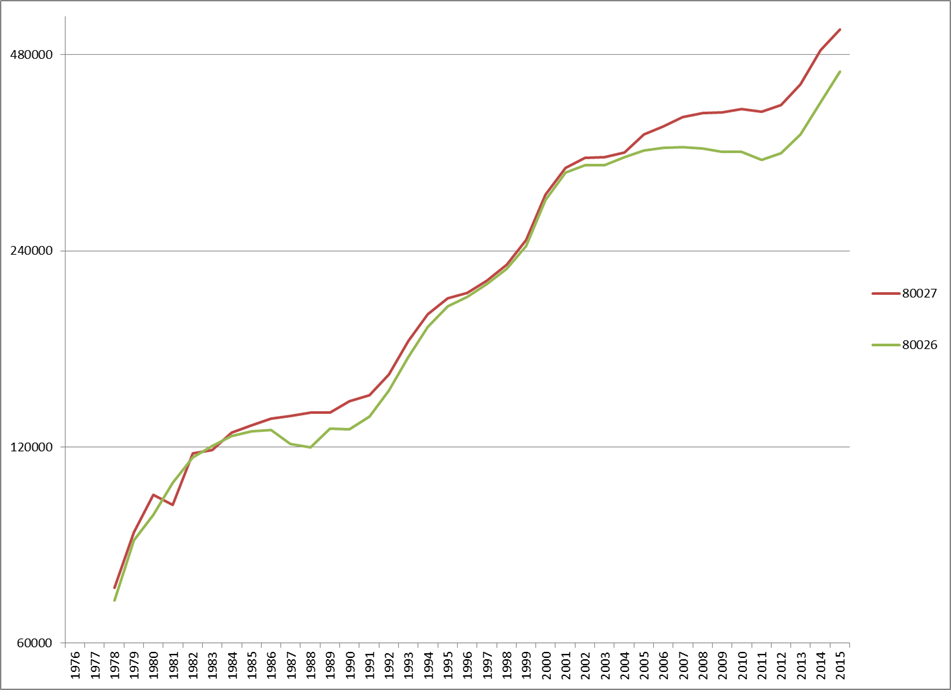 Here is a comparison of the zip codes that make up the City of Boulder as well as the Boulder MSA.  The Boulder MSA is comprised of all of Boulder County, so not surprising that it is lower than the City of Boulder zips. As you look at these City of Boulder zip codes, remember that the city boundaries and the zip code boundaries do not match up nicely. 80302 includes all of Sugarloaf and Gold Hill. 80301 includes Gunbarrel and other NE unincorporated areas. The unincorporated areas between Boulder and Louisville/Lafayette/Superior are also included in 80303. Not surprising that 80304, which includes the central core of Boulder and the Newlands neighborhood, tops this chart. As we’ve seen before, the City of Boulder doesn’t often experience depreciation and when it does it is mild and quickly reversed. Also interesting that by 1990, the sequencing of the zip codes in order of most expensive to most affordable has remained constant except for the switch between 80301 & 80305 that happened in 2008. 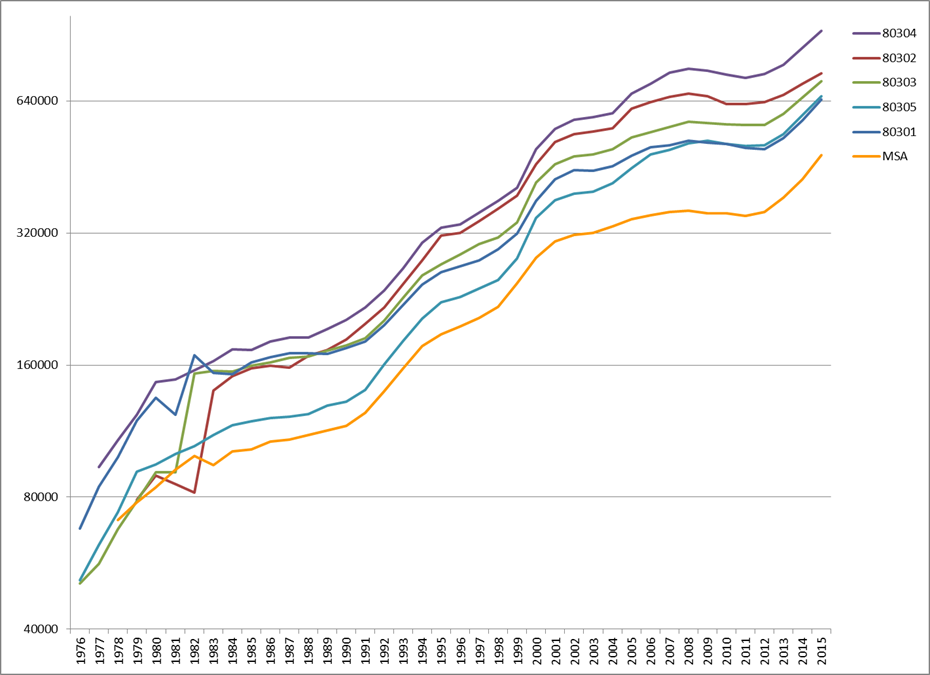 As I mentioned at the beginning, I was expecting to find a pattern in this data that wasn’t readily apparent. I was expecting to find that as you moved further away from Boulder you’d see the effect of the Great Recession on home values quite clearly. The further from Boulder, the greater the effect. I found instead that home values were surprisingly stable and comparable in changes until you went very far from Boulder. In this chart, I was finally able to find the dip I was expecting, I just had to go East of I-25 to find it. Even though these three areas have had strong appreciation since the end of the Great Recession, they are just now showing home values above where they were at before the downturn. The Commerce City zip code includes all of the new home construction that was finished out by the airport at 104th and E-470. In the past there has been the idea of a moat of home value safety around Boulder that was created by Boulder’s open space policies. The influence of that moat use to extend out to around Lafayette but now is probably at I-25 as you head East. 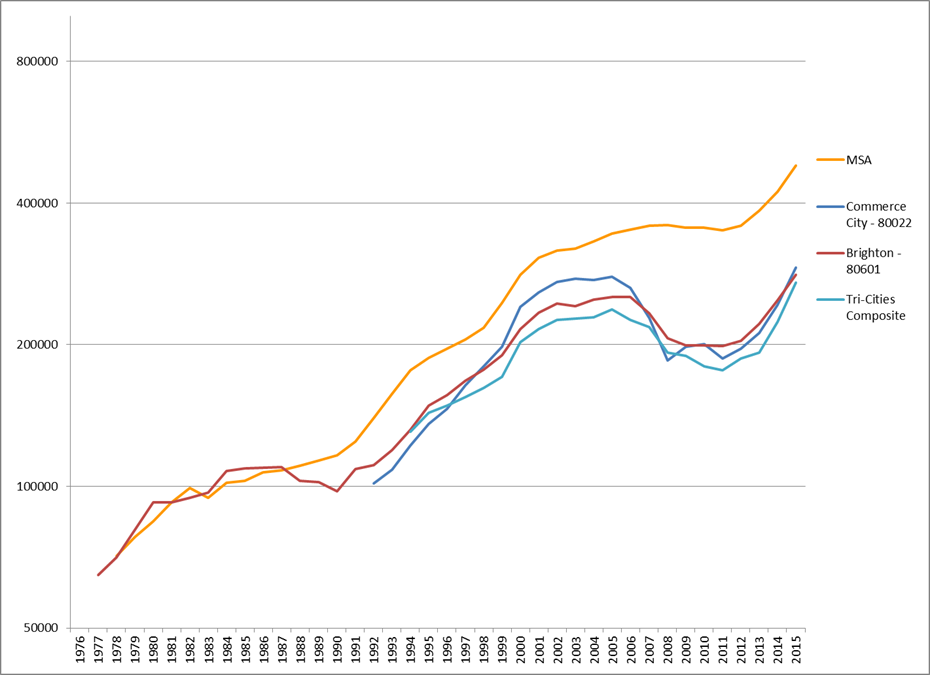 One last chart for contemplation. What if you had $78,000 to invest in real estate in 1979?  That was the median home value for Boulder County back then. How differently would your investment have grown depending on where you purchased a home? For this chart I created the dataset a little differently. I set all of the zip codes to the 78K value and then used the HPI zip code data to appreciate those zip codes to 2015. When I looked at these charts comparing the zip codes, I didn’t see much variation in appreciation. When you run the charts starting from a common data point, the differences are dramatically demonstrated. The City of Boulder is expensive, but it definitely provides the best return. If you invested in Brighton, your money would have tripled. If you invested in Boulder 80304, your money would have increased about seven and half times. Interestingly, the five City of Boulder zip codes do not occupy the top spots but have been displaced by 80027 and 80026. This is likely due to the City of Boulder zip codes containing non-City of Boulder areas although 80026 and 80027 have been very strong lately as the City of Boulder has become expensive.

Hope everyone had a wonderful Fourth of July. 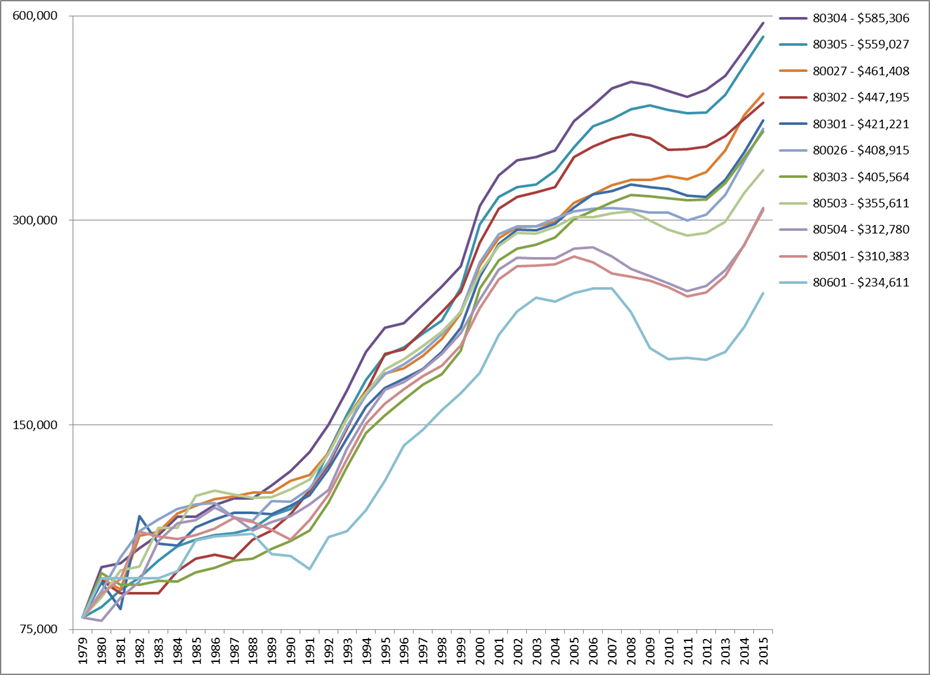