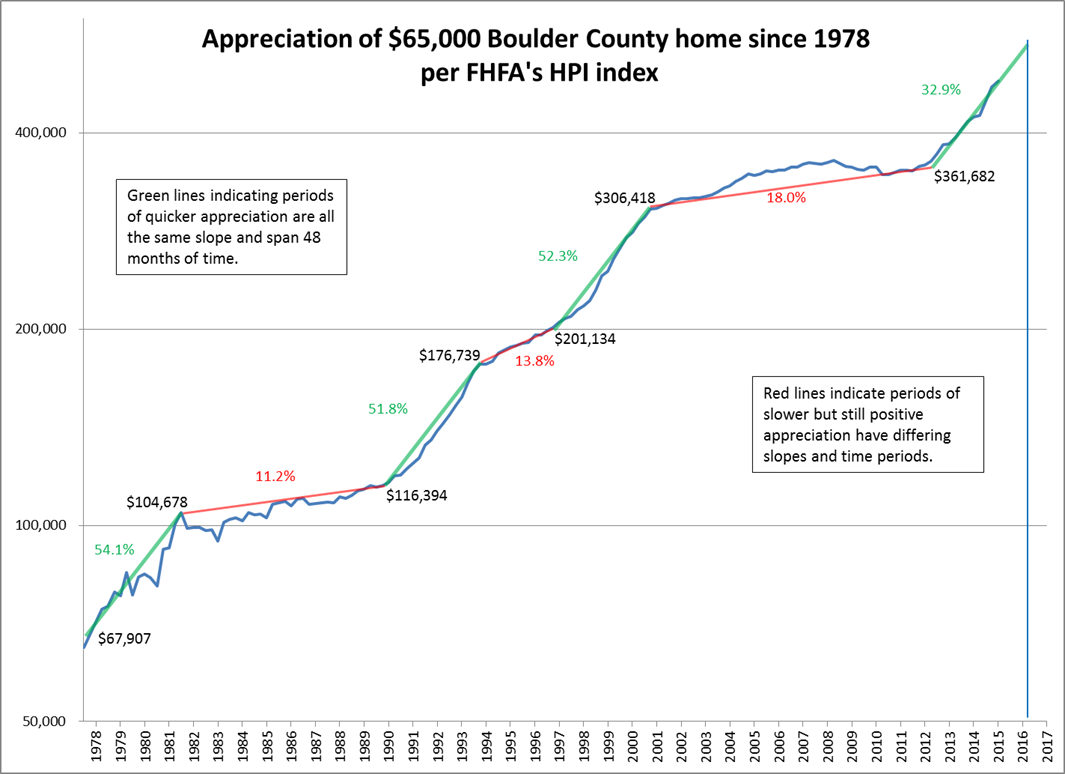 We all know the market is hot right now, but what do we do with that knowledge?  How do we advise our buyers and sellers?  These questions were raised at a recent office meeting and I found some interesting trends in the data from the Federal Housing Finance Agency’s (FHFA) Home Purchase Index (HPI) that illuminate our recent market appreciation and it’s relation to past periods of market appreciation.

The HPI data is for all of Boulder County and is comprised of paired sales drawn from all of the appraisals done on conforming, conventional mortgages on single family homes.  This means we’re looking at the sale of the same home over time, so we truly are comparing apples to apples.   This data does not include any attached home sales or data from VA, FHA or Jumbo mortgages.

Here’s the chart with a logarithmic scale that displays the same percentage changes in values with the same vertical scale regardless of value, so that a period of 50% appreciation in home values will have the same vertical height on the chart without regard to the starting and ending values.  I used the average sales price for a single family home in Boulder County at the end of 2015, and used the FHFA data to take that average home back in time to its value in 1978.

One of the things I keep hearing lately is how unprecedented our current market strength is.  While the buyer frenzy for the few properties on the market may be unprecedented, the appreciation rates we’re currently seeing match nicely with the periods of appreciation we saw from 1978-1982, 1990-1994, and 1997-2001.  I was very surprised how well the green lines in the chart above matched the length and slope of the three preceding periods of strong appreciation. All of these 48 month periods saw appreciation that rose between 51.8% – 54.1%. This is interesting as our current period of appreciation started in 2013 and so far, values have gone up 32.9%.  This tells me we can still expect about 19-20% more appreciation in home values before the cycle ends.  This also tells me we’re likely to see strong appreciation into early 2017 assuming the same 48 month pattern holds true for this uptick in the market.

The lack of any real downturns in the chart was also interesting.  There were two times when you could have lost money if you bought at the very peak of the market and then had to sell within the next 3 years, Q2 1982 when we saw a 9.7% downturn and Q1 2009 when we saw a 3.4% downturn.  One time, Q2 1987, if you bought and had to sell within the next year you would have lost 1.43%.  Other than those times, it’s been hard to point to any time in the chart where values have dropped dramatically.  In fact, if you bought a property and held it for 6 years or more, there has never been a time in this dataset that you would have lost money.

So what will it mean when this current cycle ends?  I don’t think that means we’ll see depreciation, just a lessening in the rate of appreciation that will lead to a flatter period of still positive but small appreciation rates.  I’ve heard many times before that the longer the flat period, the greater the rise at the start of the next cycle.  Since our upturns have been very consistent without regard to the previous flat period, I’m not sure I believe in that assessment.  I think the consistency in the upturns has more to do with equity appreciation and wage gains.  The purchasing power of the buyers builds up until there is a breakout but can only be sustained for so long before that buying power has to be recharged.

The one thing that could throw this whole analysis out the window is the potentially changing nature of our market.  Has our market fundamentally changed?  If it has, an analysis comparing the current market to past patterns is doomed.  Buyers have definitely become more informed through the use of the internet, but I don’t think that has fundamentally changed the way the market appreciates.  The one change that I see that probably has started to fundamentally change our market and will continue to change it is the build-out of Boulder County.  All of the past appreciation periods occurred in times when more homes could be built, a new home relief valve on accumulating demand.  We’re not built-out yet, but that day is on the horizon and assuming Boulder County remains the desirable place to be that it is now, this change will be dramatic and will finalize the supply side of the equation forever.