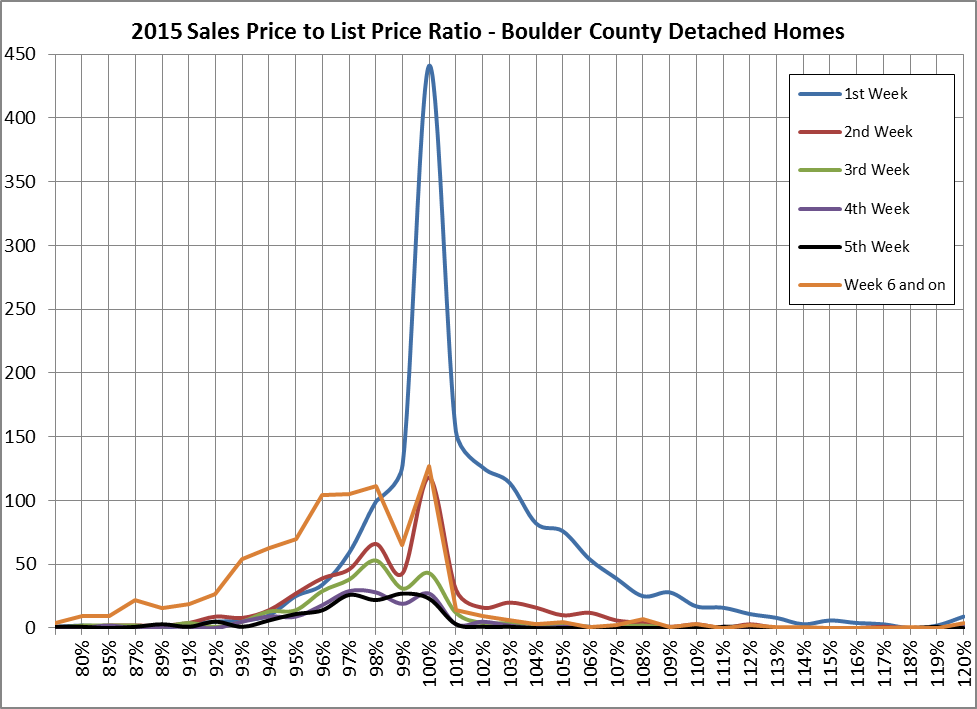 Last month we looked at the sales price to list price ratios for sales in Boulder County going back over the last 5 years.  I had some caveats in the data and a couple of people asked me some questions on ways to massage the data which led to this month’s second review.

The big caveat last month was the question of concessions, which thankfully has been eliminated due to some better downloading of information out of IRES.  The charts in the article last month had sales prices that may or may not have included concessions.  This month’s charts and data have sales prices that have had any concessions deducted out of the sales price.  Last month, I had some doubt over the number of sales at or over asking price that would have been below asking price once concessions had been deducted.  This month, all the data should be as accurate as possible.

For many people, the numbers in the charts disappear in a blur of meaninglessness.  For those people, I have again tried to capture this data in charts that show the dramatic change between properties that sell the first week and then in the weeks after. Here’s the single family home chart. 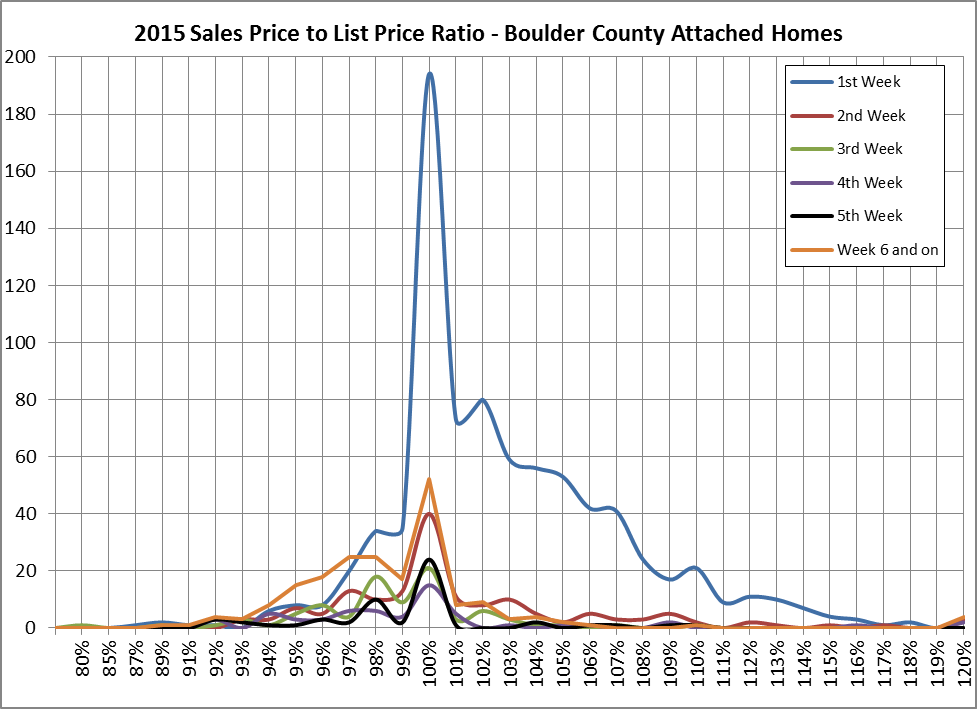 You’ll note in both charts the strong breadth of sales that are happening above asking price in the first week and how quickly that strength disappears in later weeks. Attached dwelling sales for over asking price are also stronger than the single family sales over asking price which I assume is a function of the generally lower prices for the attached sales.  As in last month’s charts, you’ll continue to see the dip in the number of sales that happen right at 99% of asking price.

Unfortunately, I couldn’t eliminate every caveat and have one in this data too.  I haven’t found an easy way to determine if the list date in the downloadable IRES data is the first list date or a re-list date.  I would assume that properties that are re-listed and re-exposed to the market with a new MLS # won’t perform as well as a truly new to the market listing.

Related Articles
Uncategorized Unprecedented Under Contract Numbers in Boulder County The activity in the Boulder County market remains very strong as we move into Spring and a time period where we normally see even more strength. I’ve been trying to find a way to convey to my clients just how atypical the last few months have been and have settled on showing them the charts […]
Uncategorized 2020 Sales Price to Asking Price ratios This should be the last of my 2020 market review articles where I look at the percentage of homes selling for asking price or better and how that metric has trended over time. The data I used for this chart has had any sales concessions deducted from the sales price and is for the ratio […]
Uncategorized 2020 Boulder County Sales recap Time to take a look back at the 2020 sales numbers for the Boulder County real estate market. As is usual, these stats are IRES data only and may miss sales only attributed in REColorado and any sales not reported to an MLS system. Due to the duplication problems between the MLS systems, I am […]